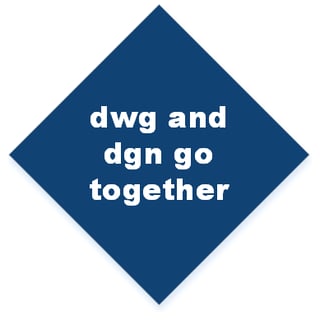 Coming into the IntelliCAD World Conference, it wasn’t clear what the ITC was doing with DGN and why. “Native DGN Editing” was on the schedule, but why would .dwg users want to edit .dgn files side-by-side? Intriguing idea in theory, but practically speaking aren’t most CAD folks either .dgn or .dwg users?

Now we see: take your existing code that runs and customizes IntelliCAD for .dwg files and have that same code work for .dgn files. Here is what we learned that's already working natively with .dgn files directly in IntelliCAD:

It will be only the second .dgn editor in the marketplace, but the same IntelliCAD will also work at the same time with open .dwg files. So will we eventually see more CAD users working in both .dwg and .dgn? As for ITC members, will they mix and match the top features of .dwg and .dgn to create a best-in-class blended solution? Why. Not.