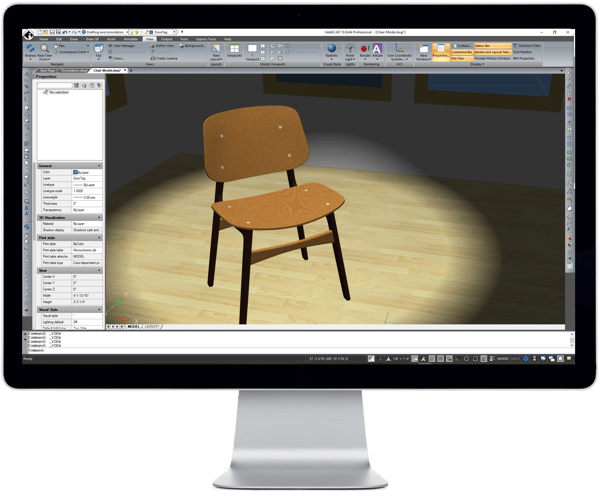 IntelliCAD 10.0 is a major release that includes numerous new features.

The OpenGL ES graphics device is now supported for enhanced display quality and performance, which also includes new visual styles. A new materials library contains materials that can be assigned to entities and layers and then displayed with visual styles; spot and point lights can also now display in-program with visual styles. The redesigned View Manager has more options available and allows users to make selections dynamically for the view’s background, perspective, lens length, etc. New dynamic input incorporates command prompts and measurement guides at the cursor. Printing with .pc3 customization files is enhanced with the ability to set margins, page size, .pmp files, and settings that vary according to the output file type. New import file formats include .obj and .stl. Many new properties are available for various entity types in the Properties pane, including the ability to view properties of custom entities. IntelliCAD 10 also includes the ability to migrate user interface customizations from previous versions.

Smaller features that will have a big efficiency boost for end-users are the ability to re-order and sort layer filters, combine paragraphs and clear formatting of multiline text, determine which user interface items are hidden when cleaning the screen, use new videos and online resources from the Start page, convert closed entities to solids, specify a layer state for each published sheet, a redesigned status bar, enhancements for Section 508 usability, better 4K display support, and an initial Hungarian translation.

For versions of IntelliCAD that work with BIM files, draw roofs and beams, create mitered joints for beams, explode attached BIM underlays into polyface meshes and polylines that can be edited while retaining underlay functionality, and use new options for section lines and elevation lines.

For versions of IntelliCAD that open, save, and edit .dgn files in their native format, the supported command set now includes Multiline Text, Chamfer, and Dimension Styles.

Other improvements and fixes are found in performance, working with files, editing and selecting entities, text, printing, and more.

David Lorenzo, ITC President, stated, “IntelliCAD 10 is a huge structural update with new core libraries from the ODA, a new geometry library, updated graphics, and new APIs. Yes, there are several interesting new features for users too, but the structural changes provide a much stronger foundation on which ITC members can build even more complex and diverse applications.”

An overview video of IntelliCAD 10.0 features is on YouTube at https://youtu.be/FmyaEugUMio.

A new maintenance release for ActCAD 2020 is available. ActCAD users can upgrade to the latest version 92742 using the CHECKFORUPDATES command. The latest ActCAD version is also available directly from the ActCAD website in the downloads area.

Available in 64- and 32-bit, ActCAD is a native .dwg and .dxf CAD software program used for 2D drafting and 3D modeling. ActCAD is based on the IntelliCAD engine.

A maintenance release for ActCAD 2020 is now available that includes enhancements to network licensing, many new color books for ActCAD entities, improvements to the user interface, fixes, and more.

ActCAD users can upgrade to the latest 92711 version using the CHECKFORUPDATES command. New ActCAD users can download the latest ActCAD version directly from the ActCAD website in the downloads area. Available in 64- and 32-bit, ActCAD is based on the IntelliCAD engine. 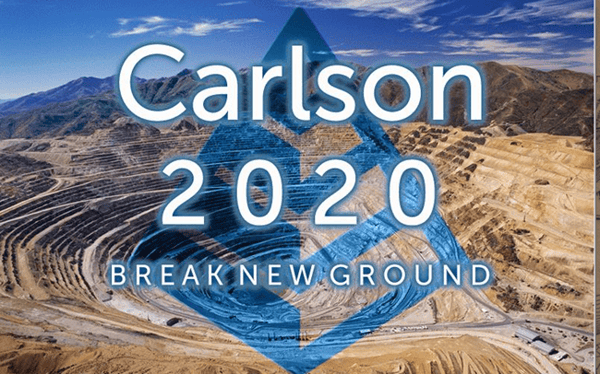 In case you missed it, an important update is available for the Carlson 2020 product line. The update includes fixes for all Carlson users including those who use IntelliCAD. Get details about the update >>

IntelliCAD comes built-in to Carlson Software products. To find out more about Carlson 2020: 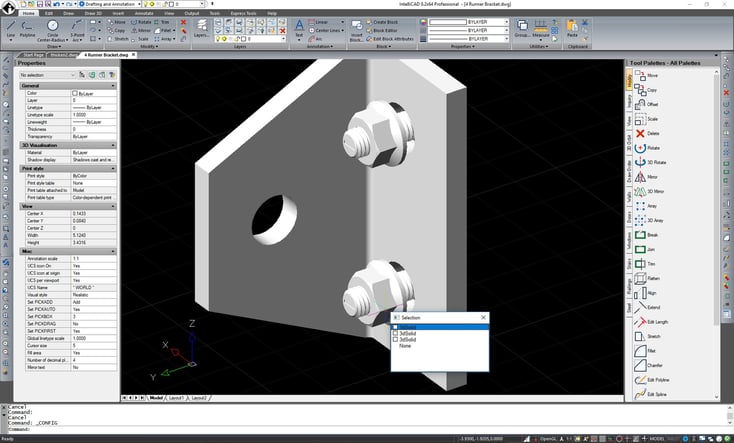 IntelliCAD 9.2 is a major release that includes many new features and improvements including: import and export IGES and STEP format files, delete and combine duplicate or overlapping entities using the Overkill command, use right-to-left fonts, choose from additional list types for multiline text, undo or redo a selected range of actions, thicken surfaces and meshes to convert them to three-dimensional solids (for IntelliCAD versions that support solids), and publish a drawing to the newly supported .dwf/.dwfx published format. You can also set up automatic publishing to create .pdf, .dwf, or .dwfx files when you save or close a drawing.

Selection includes a collection of new features. The new Selection Filter pane, similar to the Properties pane, displays all entities in a drawing and allows you to filter and select entities by layer, color, entity type, and linetype. Polygons, rectangles, and break lines have additional grips and properties for smart editing, and selection cycling is available which makes it easier to select entities that overlap.

For versions of IntelliCAD that work with BIM files, add elevation and section lines to models; draw curtain walls; draw detailing elements for wood, studs, joists, and track; and convert two-dimensional entities to walls and slabs.

For versions of IntelliCAD that open, save, and edit .dgn files in their native format, the supported command set continues to grow with 3DORBIT, ATTDEF, BASE, BROWSER, DDVPOINT, DRAWORDER, ELLIPSE, IMAGE, and IMAGEATTACH.

David Lorenzo, ITC President, stated, “This second major release for 2019 provides exciting new features for our members, and continues to keep our command backlog clear so we can focus on refactoring core components with our remaining time this year.” 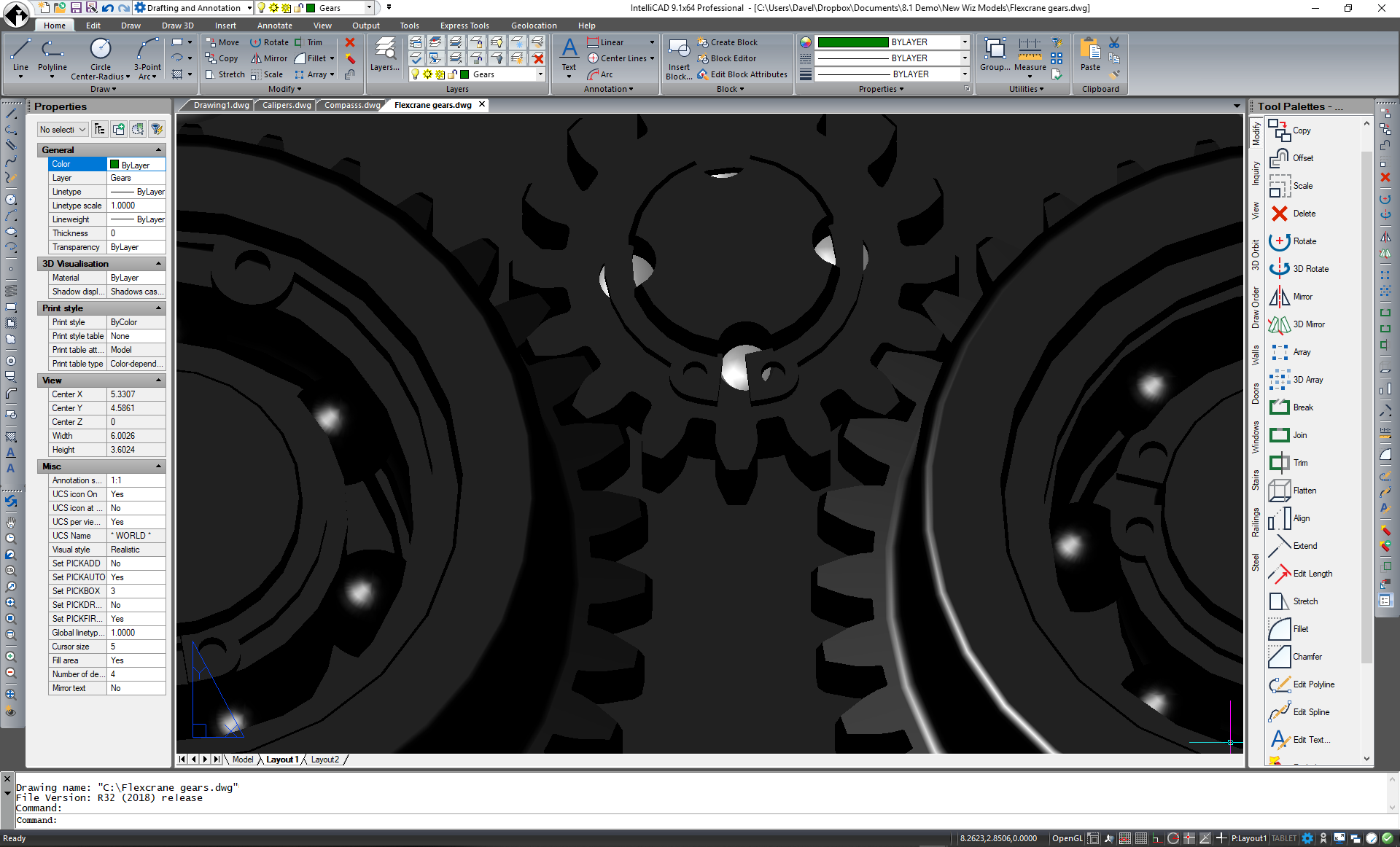 IntelliCAD 9.1 is a major release that includes many new features and improvements.

One of the new major capabilities is attaching digital signatures to .dwg files and validating them. Another is the new Block Editor that makes it easier to create and edit blocks. One more is creating palettes that contain blocks, similar to using a stencil for easily adding shapes to a drawing. There is also a new type of selection grip for users working with schematic drawings where precise scale or sizing is not required.

More IntelliCAD 9.1 features include: print and publish drawings directly to PDF, click keywords at the command prompt, use a Start Page when the program launches, single-click to hide many user interface items at once and increase the drawing area, synchronize viewports, convert to mesh, convert to surface, show and hide edges of three-dimensional entities, view and edit system variables in the new System Variables Manager, and much more.

For versions of IntelliCAD that work with BIM files, attach version 2019 .rvt/.rfa files and draw more AEC entities such as stairs, railings, and steel.

For versions of IntelliCAD that open, save, and edit .dgn files in their native format, users can now work with solids, hatches, aligned dimensions, fill mode, and more.

David Lorenzo, ITC President, stated, “Although the 9.1 release was accomplished in about half the time of a normal IntelliCAD release cycle, it is packed with new features. The depth and breadth of the commands in this short cycle shows how the consortium is growing. This 9.1 spring release provides exciting new features for our members, and it clears much of our command backlog so we can focus on refactoring core components and select key features with our remaining time this year.”

Carlson Software released iCAD 2019 just before the holiday blitz at the end of 2018. iCAD 2019 is based on the IntelliCAD engine version 9.0.

Carlson Software recently released version 2019 of its product suite including Carlson Mining, Carlson Survey, and Carlson Civil/Hydrology/GIS. Carlson products come with IntelliCAD built-in and an option for their end-users to purchase Autodesk® AutoCAD® separately if desired.

As expected, new features are found throughout the Carlson product line. Special mention goes to working natively with both .dwg and .dgn files. Open, save, print, and edit all with one CAD editor thanks to the IntelliCAD 9.0 engine.

For more details from Carlson, see: 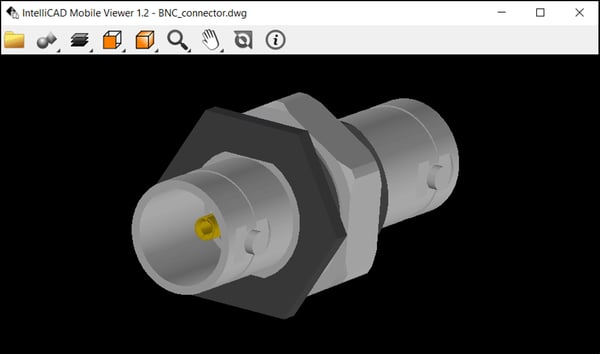 Two decades of IntelliCAD has built a solid foundation for blending CAD with new technology that wasn't around twenty years ago. Like smartphones.

At IntelliCAD World 2018 in Prague we got an update on all things IntelliCAD Mobile. The mobile app is currently a viewer that runs on Android, iOS, macOS, and Windows (desktop app). You can do all the navigation that you'd expect and also toggle layers and measure with a tape line. A variety of file types are supported, not just one or two:

IntelliCAD Mobile, like IntelliCAD desktop versions, is built with libraries from the ODA. IntelliCAD continues to be intertwined with ODA technology after twenty years of growth by both organizations. And partnerships are what the ITC is all about. We'll be posting soon about ITC members and their technologies presented at the conference. Impressive technology. Impressive partners.