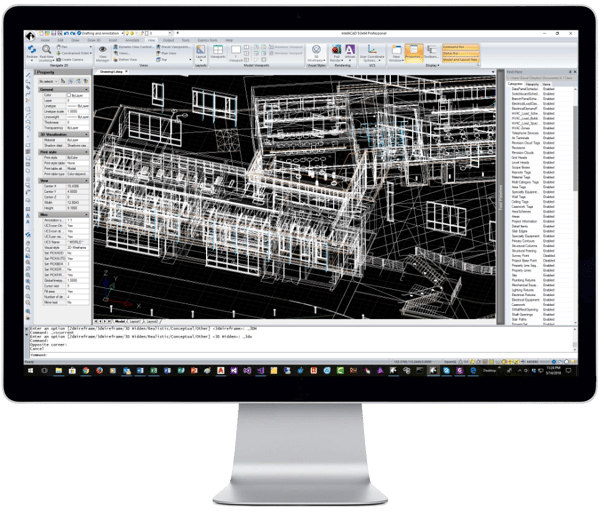 IntelliCAD 9.0 is a major release that includes many new features and improvements, including native support for opening, editing, and saving 2018 .dwg files.

IntelliCAD 9.0 boosts performance in many areas, with the most noticeable increase in speed during file saves. Now only modifications need to be saved to .dwg files, which makes for extremely fast saving especially for large .dwg files that contain only a few changes. Also some lingering issues related to running IntelliCAD on the Fall Creators 2017 Microsoft® Windows® update were fixed.

For versions of IntelliCAD that work with BIM files, users can now attach .rvt/.rfa files; snap to, explode, and control display for categories, stories, and views in attached .rvt/.rfa files; import .ifc files as architectural entities (in addition to attaching these file types as before); and draw AEC entities such as walls, windows, doors, openings, and slabs.

For versions of IntelliCAD that open, save, and edit .dgn files in their native format, users can now create 3dPoly entities, linetypes, hatches, and images. New support is also included for properties, align, break, mirror, and more.

The ITC developed many additions in-house, while some new features were donated in entirety by ITC member companies.

David Lorenzo, ITC President, stated, “IntelliCAD 9 provides solid enhancements to the core while branching out into some interesting new areas like DGN and BIM through our Special Interest Groups. The BIM SIG provides excellent horizontal tools to access new file types, while giving members sample applications of how they can leverage new API libraries to read/write .rvt/.rfa/.ifc files as well as AEC objects inside of IntelliCAD.”

Just a few of the new features: AUTOSEZ, SLOPE, AIDIMFLIPARROW, 3D PDF support, import and export to many new file formats, enhancements to point clouds, and much more.

PROGECAD is a 2D/3D DWG/DXF-native CAD application based on the IntelliCAD engine. Its AEC, MCAD, and general CAD users benefit from native .dwg compatibility, a perpetual software license, and robust features for working with CAD drawings.